i) The paramagnetic material’s atoms/molecules have a permanent magnetic dipole moment individually. As there is a random thermal motion of the atoms/molecules, so, no net magnetization is seen. In the presence of a strong external field B0, at low temperatures, the individual atomic dipole moment align and point in the same direction as B0. Diagram shows a bar of paramagnetic material placed in an external field. The field lines get concentrated inside the material, and the field inside is enhanced. 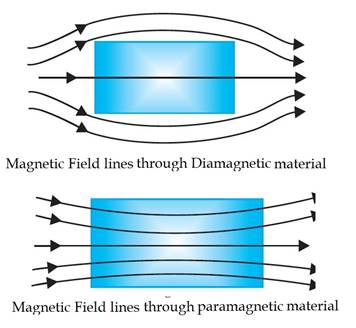