Select a meteorological observatory located in your city or near your town. Tabulate the temperature data as given in the climatological table of observatories:

(i) Note the altitude, latitude of the observatory and the period for which the mean is calculated.

(ii) Define the terms related to temperature as given in the table.

(vi) Find out in which months the daily range of temperature is the highest and the lowest.

(vii) List out the factors that determine the temperature of the place and explain the possible causes for temperature variation in the months of January, May, July and October. 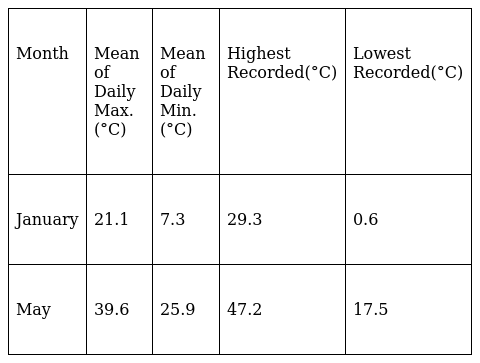 ii) Mean of Daily Maximum is the average highest temperature recorded in a month.

Mean of Daily minimum is the average lowest temperature recorded in a month.

vi) Months in which daily range of temperature is highest- April, May, June

Months in which daily range of temperature is lowest- December, January

vii) Kolkata is located near to the tropic of Cancer where it experiences the scorching heats of sun from March to 21st June. And the Maximum temperature rises in May. After that the monsoon sets in and the weather becomes cool. So July is cooler. Towards the end of October as the monsoons draw back the place becomes cool as now the Tropic of Capricorn experiences the scorching heat of the Sun and so from October the temperature dips down and in January it becomes lowest. January is the coldest month in Kolkata.

How useful is this solution?We strive to provide quality solutions. Please rate us to serve you better.
PREVIOUSAnswer the following questions in about 150 words.(i) How do the latitude and the tilt in the axis of rotation of the earth affect the amount of radiation received at the earth’s surface?(ii) Discuss the processes through which the earth-atmosphere system maintains heat balance.(iii) Compare the global distribution of temperature in January over the northern and the southern hemisphere of the earth.
Related Videos

For the parabola, y2 = 4px find the extremities of a double ordinate of length 8p. Prove that the lines from the vertex to its extremities are at right angles.

Politics is more than what politicians do. Do you agree with this statement? Give examples.

At 0°C, the density of a certain oxide of a gas at 2 bar is same as that of dinitrogen at 5 bar. What is the molecular mass of the oxide?

Find the points on the x-axis, whose distances from the line

Find the distance between parallel lines

Find the principal and general solutions of the following equations:

Given below is the diagrammatic representation of a standard ECG. Label its different peaks.

Using the equation of state pV = nRT; show that at a given temperature density of a gas is proportional to gas pressure p.

The author’s meeting with Norbu.