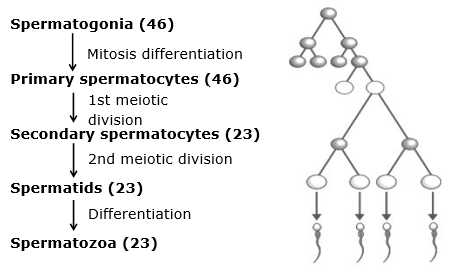 • At puberty, in testis spermatogonia (the immature male germ cells) produce sperms by the process of spermatogenesis.

• On the inside wall of seminiferous tubules, the spermatogonia present.

• They are multiply by mitotic division and increase in numbers and each spermatogonium is diploid and contains 46 chromosomes.

• The first mitotic division leading to the formation of two equal haploid cells called secondary spermatocytes having only 23 chromosomes each.

• For the production of four equal haploid spermatids, the secondary spermatocytes undergo for the second mitotic division.

• Spermiogenesis is the process by which the spermatids are transformed into spermatozoa (sperms).

• The flowers are unisexual.

• Like maize and castor, both male and female flowers are present on the same plant.

• Cleistogamous flowers do not open at all.

• The anthers and stigma present close to each other.

• When anthers dehisce in the flower buds, to effect pollination pollen grains comein contact with the stigma.

• It is autogamous as there is no chance of cross-pollen landing on the stigma.

• It is a genetic mechanism by which self- pollination does not take place.

In the figure giv

What are the poss

Let A be the set

What is the de Br