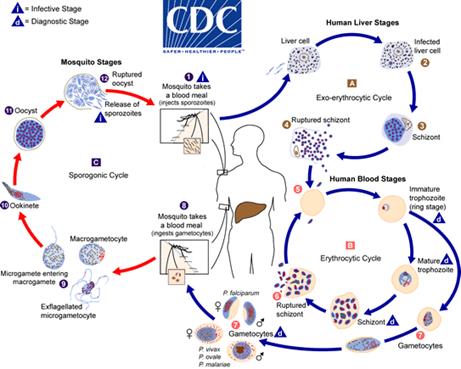 1. The female anopheles mosquito transmits the motile infective form called sporozite to a vertebrate host such as humans.

2. These Sporozites infect the liver where they asexually multiply and mature to form Schizonts.

3. These Schizonts rupture and release Merozoites.

4. Now, Merozoites enter RBC’s where they multiply asexually and infect the RBC leading to cycles of fever.

7. The gametophytes produced are ingested by the female anopheles mosquito when it bites the infected person.

8. The parasites then multiply in the gut of the mosquito known as sporogonic cycle.

10. These zygotes now become motile and elongated called as sporozite.