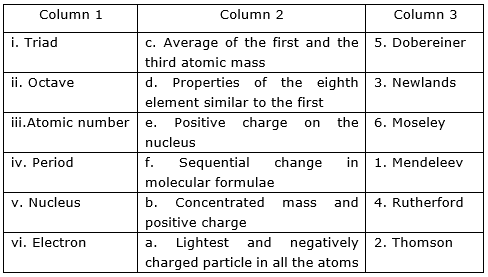 i. The German Chemist, Johann Dobereiner was the first to consider the idea of trends among properties of elements. He made group of three elements each which are having similar properties and called them triads. He showed that the atomic mass of the middle element was approx. equal to the mean of atomic masses of other two elements. For example:

ii. The English Chemist, John Newlands discovered the Law of Octaves. He arranged the elements in increasing order of their atomic masses. He noticed that every eighth element had properties similar to the first element.

iii. The English Scientist, Henry Moseley showed that the atomic number is equal to the positive charge on the nucleus or the total number of protons in the nucleus of the atom of that element.

The atomic number is represented by ‘Z’.

iv. Mendeleev organized the periodic table on the basis of chemical and physical properties of the elements. The horizontal rows are called periods. He arranged the elements sequentially in periods according to the change in molecular formula.

v. A scientist Rutherford bombarded a very thin layer of gold with alpha-particles. On the basis of observations, he concluded that:

(a) The nucleus is at the center of the atoms.

(b) It has positive charge.

(c) The positive charge and most of the mass of the atom is concentrated in the nucleus. 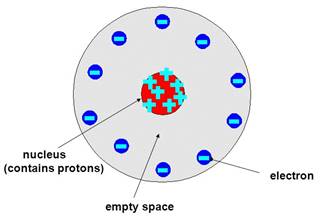 vi. J.J Thomson founded that an atom has a spherical shape. 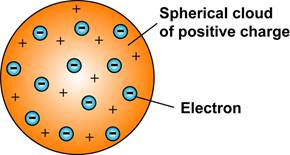 Explain why a con

Find the roots of

One is asked to s