2.1 Medicinal Technology – a gift or a curse?

a. Occasional self-medicatn – normal in India

b. Medical diagnosis only during last 100 years

d. Even if not an unknown illness, can treat symp

e. Trained to decide when to act on symp and when on cause

a. Has brought about much progress

i. Too much advertising leading to overuse of drugs

ii. Emergence of the sedentary society with faulty ways of life

b. Try inducing faith in products through steep pricing

c. Produces real effects in some people because of a false belief

d. Also aim for people with small illnesses as self-medicatn

b. Their benefits doubtful

e. Patient could become dependent on them

f. Could be taken in excess

g. May cause food poisoning

h. Symp of serious issue could be masked and medical help not sought

i. Self-diagnosis a greater danger than self-medicatn 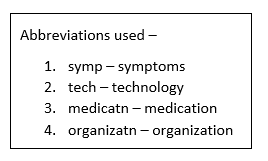 Technology has come a long way, influencing the medicinal world to become more scientific in terms of identification of illnesses and their treatment. The doctor is trained to treat either symptoms or illnesses, whichever necessary. Yet, the advertisement industry manages to coerce people into self-medication by feeding on their fears. Although a common practice in most Indian households, self-diagnosis and self-medication can sometimes lead to covering up of other major illnesses and absence of the required medical attention. Besides, the adverse effects associated with it, say food poisoning or excessive intake, only speaks of the consequences of this wrong practice.