Read each statement below carefully and state with reasons, if it is true or false:

Explanation: The magnitude of a vector is always a scalar because magnitude is a numerical value.

Explanation: The average speed of a particle is either greater or equal to the magnitude of average velocity of the particle over the same interval of time. Speed is the ratio of distance travelled to the time taken. Velocity is the ratio of displacement of an object to the time taken. For a given path over a given time period, distance is always greater than or equal to the displacement of the object. Hence, speed is always greater than or equal to velocity. The equality condition occurs for a straight line.

Explanation: Three vectors not lying in a plane can never add up to give a null vector. For the resultant to be a null vector, the three vectors should form a triangle. The three sides of a triangle necessarily lie on the same plane. Hence, the given statement is true.

How useful is this solution?We strive to provide quality solutions. Please rate us to serve you better.
PREVIOUSState with reasons, whether the following algebraic operations with scalar and vector physical quantities are meaningful:(a) adding any two scalars, (b) adding a scalar to a vector of the same dimensions,(c) multiplying any vector by any scalar, (d) multiplying any two scalars, (e) adding any two vectors, (f) adding a component of a vector to the same vector.NEXTEstablish the following vector inequalities geometrically or otherwise:A. B. C. D. When does the equality sign above apply?
Related Videos

Two vectors have magnitudes 3 unit and 4 units respectively. What should be the angle between them if the magnitude of the resultant is (a) 1 unit, (b) 5 unit and (c) 7 unit.

Find the angle between them.

A particle moves on a given straight line with a constant speed υ. At a certain time, it is at a point P on its straight-line path. O is a fixed point. Show that

is independent of the position P.

Give an example for which

Can we have physical quantities having magnitude and direction which are not vectors?

Refer to figure (2-EI). Find (a) the magnitude, (b) x and y components and (c) the angle with the X-axis of the resultant of 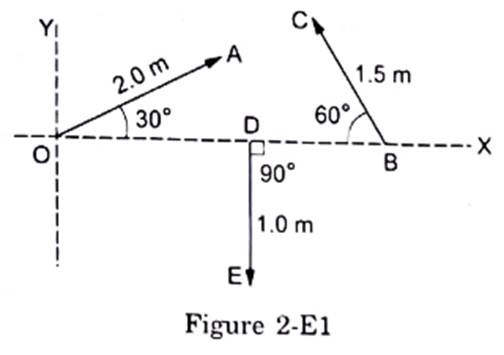