Quote some instances where human intervention saved the forest from destruction.


Class 10thAll In One Science16. Management of Natural Resources

● The Chipko Andolan (Hug the Trees Movement) was the result of a grass root level effort to end the separate of people from their forests.

● The movement originated from an incident in a remote village called Reni in Garhwal during the early 1970s.

● There was a dispute between the local villagers and a contractor who had been allowed to cut trees in a forest close to the village.

● On a particular day, the contractor’s workers appeared in the forest to cut the trees, seeing this the women of the village reached the forest quickly and clasped the tree trunks thus, preventing the workers from felling the trees.

● The protest spread in that area, as a result, the contractor had to withdraw its plan to cut trees. 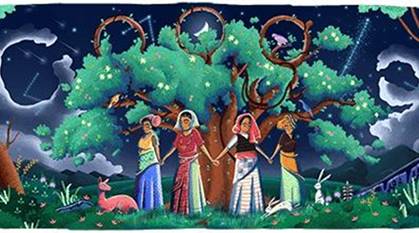 ● Amrita Devi, a female villager could not bear the destruction of both her faith and the village’s sacred trees.

● She hugged the trees and encouraged others to do the same. 363 Bishnoi villagers were killed in this movement.

How useful is this solution?We strive to provide quality solutions. Please rate us to serve you better.
PREVIOUSForest resources ought to be used in a manner that is both environmentally and developmentally sound. Explain this briefly.NEXTExplain "industrialization is one of the main causes of deterioration of the environment."
Related Videos

Know About the Time ManagementFREE Class

All In One Science 873 views
Q