Let ABC be the triangle where D, E and F are the mid-points of BC, CA and AB respectively 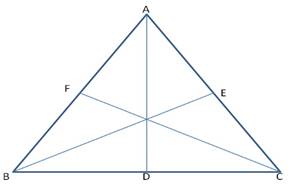 As, we know that the sum of two sides of the triangle is greater than twice the median bisecting the third side

Now, by adding all these we get:

Hence, the perimeter of the triangle is greater than the sum of its medians

How useful is this solution?We strive to provide quality solutions. Please rate us to serve you better.
PREVIOUSIn a right ∆ABC, NEXTWhich is true?<br
Related Videos