Let us Work Out 9

In the triangle ABC, AD is perpendicular on the bisector of ∠ABC. From the point D, a straight line DE parallel to the side BC is drawn which intersects the side AC at the point E. Let us prove that AE = EC. 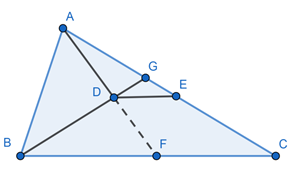 We extend the perpendicular till F such that it intersects the line BC at point F.

As BG is the angle bisector of ∠ABC,

In ΔABF, as sum of all sides of triangle is equal to 180°

We know that sides opposite to equal angles in a triangle are equal and as ∠BFA = ∠BAD.

Now, In ΔACF, as D is midpoint of AF and DE || FC, then by applying theorem:-

Through the mid-point of any side, if a line segment is drawn parallel to second side, then it will bisect the third side and the line segment intercepted by the two sides of the triangle is equal to half of the second side, we get,

⇒ E is the midpoint of AC

How useful is this solution?We strive to provide quality solutions. Please rate us to serve you better.
PREVIOUSIn the triangle ABC, the midpoints of AB and AC are D and E respectively; the midpoints of CD and BD are P and Q respectively. Let us prove that, BE and PQ bisect each other.NEXTIn the triangle ABC, AD is median. From the points B and C, two straight lines BR and CT, parallel to AD are drawn, which meet extended BA and CA at the points T and R respectively. Let us prove that
Related Videos

In the triangle ABC, D is any point on the side AC. The midpoints of AB, BC, AD and DC are P, Q, X, Y respectively. If PX = 5 cm, then let us write the length of the side QY.

In the triangle ABC, E is the midpoint of the median AD; the extended BE intersects AC at the point F. If AC=10.5 cm, then the length of AF is

In the triangle ACB, the medians BE and CF intersects at the point G. The midpoints of BG and CG are P and Q respectively. If PQ = 3 cm, then let us write the length of BC.

D and E lie on AB and AC respectively of the triangle ABC such that,

In the triangle ABC, AD is perpendicular on the bisector of ∠ABC. From the point D, a straight line DE parallel to the side BC is drawn which intersects the side AC at the point E. Let us prove that AE = EC.