So semi-perimeter can be defined as the sum of any two sides of quadrilateral.

The solution of this question is similar to that of the above question only the question statement is different. The entire proof remains the same. 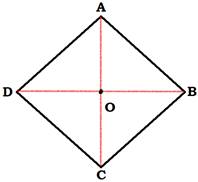 ABCD is a quadrilateral. Quadrilateral is any figure with four sides.

AC is one of the diagonals.

The diagonal AC divides the quadrilateral into two triangles.

Let the common point of intersection of two diagonals be O.

We know one basic fact about triangles that the sum of any two sides of a triangle is always greater than the third side.

Now let us add equations (i) and (iii)

We can also get the same result for other two sides as well by adding equations (ii) and (iv).

Hence it is proved that the sum of lengths of two diagonals of a quadrilateral is more than the semi-perimeter of the quadrilateral.