A Tangent is a line that intersects a circle at exactly one point.

The tangents drawn at the end points of a chord of a circle can be parallel only if that chord is the diameter of the circle. This will be clear from the fig.1 and fig.2 shown below. 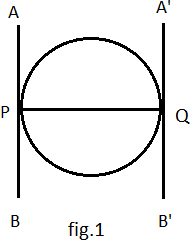 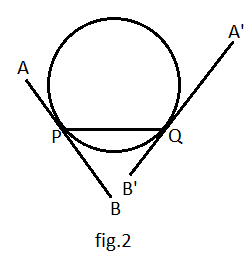 Thus, statement (a) is incorrect.

A secant is a segment that intersects a circle twice.

From a point P in the exterior of a circle, infinite no. of secants can be drown through P to the circle. This can be shown in the fig.3 drawn below. 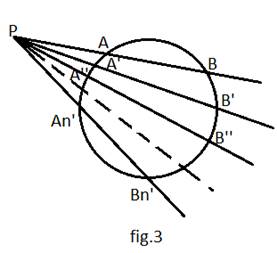 Thus, statement (b) is incorrect.

A Tangent is a line that intersects a circle at exactly one point.

From a point P in the plane of a circle, two tangents can be drawn to the circle only if point P is exterior to the circle. This can be shown in the fig.4 drawn below. 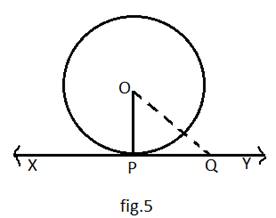 In the above fig.5, we take a point Q on the tangent XY to the circle with centre O. Obviously, this point Q should lie outside to the circle otherwise XY will become secant. And, P is the point of contact. Clearly,

Also, this is also true for all the points lying on the tangent XY except point P. And,

we know that perpendicular distance is always the shortest distance.

OP is shortest of all the distances b/w points O and any other points on XY i.e.

Hence, The perpendicular at the point of contact to the tangent to a circle passes through the centre of the circle.

How useful is this solution?We strive to provide quality solutions. Please rate us to serve you better.
PREVIOUSA fair die is thrNEXTIn the given figu
Related Videos

Why did the peopl

“This is the land

How do you evalua