From the figure below:

Also, we know that the perpendicular distance between two parallel line are same everywhere. So, we have:

Thus, we see that areas of quadrilateral area in the ratio of the lengths of the diagonals AC and PR. Hence proved.

(i) For the condition of quadrilaterals to have equal area the ratio in (4) should be one.

Therefore, the diagonals should be equal in when the areas of the two quadrilaterals are equal.

(ii) For this we draw a random quadrilateral which is neither a parallelogram nor trapezium, as shown in figure below: 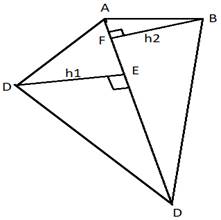 Area of the above quadrilateral can be calculated to be

= 2 cm so that area of quadrilateral becomes 15 square centimetres, as shown: 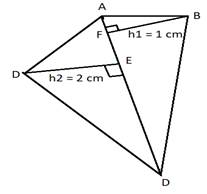 = 3 cm so that area of quadrilateral becomes 15 square centimetres, as shown: 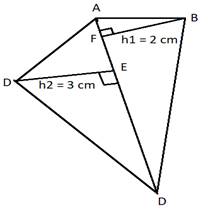 How useful is this solution?We strive to provide quality solutions. Please rate us to serve you better.
PREVIOUS<span lang="EN-US
Related Videos

What is an electr