15. Area and Perimeter of Triangle and Quadrilateral Shaped Region

Let us see by calculating 15.3

The lengths of three sides of our triangular park are 65 m, 70 m and 75 m. Let us write by calculating the length of perpendicular drawn from opposite vertex on the longest side.

AD is the perpendicular drawn on the longest side BC 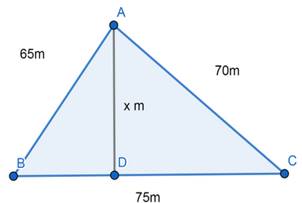 Area of a scalene triangle with given three sides

Where a, b, and c are the sides of the triangle

and s (semi perimeter of triangle )

But, Area of triangle

So area of triangle ABC

Therefore, height of the perpendicular drawn from the vertex opposite to longest side is 56m

NCERT | Imp Qs on Area of Parallelogram And Triangles44 mins

NCERT | Imp. Qs. on Area of Parallelogram and Triangles43 mins

The lengths of three sides of our triangular park are 65 m, 70 m and 75 m. Let us write by calculating the length of perpendicular drawn from opposite vertex on the longest side.

The ratio of height of the two triangles which are drawn by Suja and I is 3 : 4 and the ratio of their area is 4 : 3. Let us write by calculating what will be the ratio of two bases.

If length of each side of an equilateral triangle is doubled, what percent of area will be increased of this triangle?

If the length of each side of an equilateral triangle is trippled. What percent of area will be increased of this triangle?

The lengths of the sides containing the right angle are 12 cm and 5 cm. Let us write by calculating the length of perpendicular drawn from vertex of right angle on hypotenuse.

If each side of an equilateral triangle is 4 cm, the measure of heights is

If the area, perimeter and height of an equilateral triangle are a, s and h, then value of

The length of each equal side of an isosceles triangle is 5 cm. and length of base is 6 cm. The area of triangle is

Maria cycling at a speed of 18 km per hour covers along the perimeter of an equilateral triangular field in 10 minutes. Let us write by calculating the time required for Maria to go directly to the midpoint of the side of the field starting from its opposite vertex. (√3 ≅ 1.732)