Fill in the blanks (2 marks)

(A) Concurrent lines………through a given point.

(B) Two distinct………in a plane cannot have more than one point in common.

(A) Concurrent lines passthrough a given point.

If three or more lines pass through the same point then they are called concurrent lines and the common point is called the point of concurrency or concurrent point.

(B) Two distinct lines in a plane cannot have more than one point in common.

For any two distinct points in space there is a unique line that passes through both of them.

How useful is this solution?We strive to provide quality solutions. Please rate us to serve you better.
PREVIOUSMatch the following columns:The correct answer is:(a)-………, (b)-……., (c)-…….., (d)………NEXTA point C lies between two points A and B such that AC=CB. Prove that AC=AB.
Related Videos

Show that every line segment has one and only one middle point.

From the given figure, name the following:

(B) One rectilinear figure 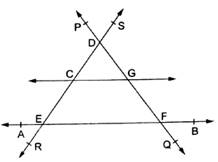 A point C is the

II. C is the interior point of AB.

III. AC=CB and C is the interior point of AB.

The given statement is true only when

NOTE The given question is followed by two statements I and II. The answer is

(A) If the question be answered by using only one statement and not the other.

(B) If the question be answered by using either of the two statements alone.

(C) If the question be answered by using both the statements only.

(D) If the question cannot be answered even by using both of the given statements. 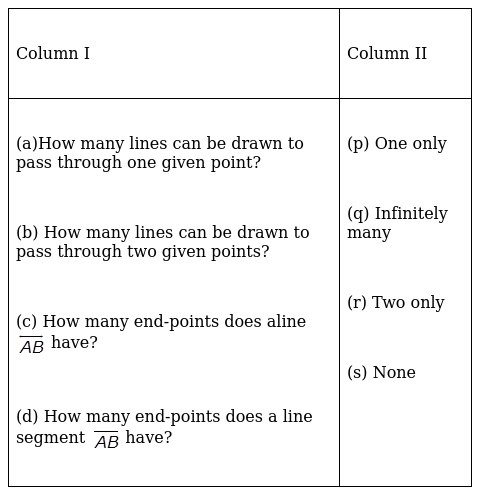 The correct answers are:

Prove that every line segment has a unique mid-point. 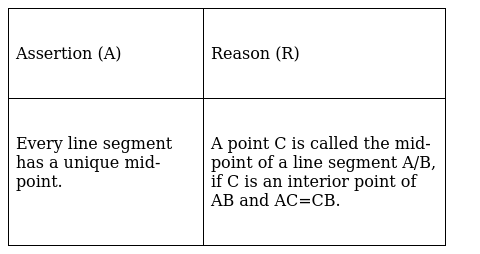