The mean of five numbers is 30. If one number is excluded, their mean becomes 28. The excluded number is
A. 28

Now to calculate the sum of these five numbers we have to multiply the mean by 5,

Change in the mean when one number is excluded, it become = 28

Now to find out the excluded number we have to subtract the sum of four numbers from the sum of five numbers,

How useful is this solution?We strive to provide quality solutions. Please rate us to serve you better.
PREVIOUSThe class mark of the class 130-150 isNEXTThe median of the data arranged in ascending order 8, 9, 12, 18, (x + 2), (x + 4), 30, 31, 34, 39 is 24. The value of x is
Try our Mini CourseMaster Important Topics in 7 DaysLearn from IITians, NITians, Doctors & Academic Experts
Dedicated counsellor for each student
24X7 Doubt Resolution
Daily Report Card
Detailed Performance Evaluation
view all courses 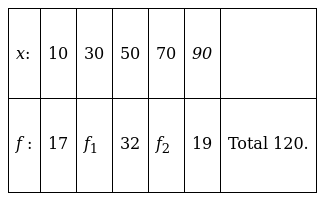 In a frequency distribution, the mild-value of a class is 10 and width of each class is 6. The lower limit of the class is

Find the median of the following data

Volcanic eruptions can cause earthquakes.

Give reasons why an earthquake occurs.

Tsunamis are generated in coastal areas.

The Himalayas are an example of fold mountains.

Molten magma is thrown out of the earth’s mantle.

Umesh has two bulbs having resistances of

He wants to connect them in a circuit, but if he connects them one at a time the filament gets burnt. Answer the following.

A. Which method should he use to connect the bulbs?

B. What are the characteristics of this way of connecting the bulbs depending on the answer of A above?

C. What will be the effective resistance in the above circuit?

Which of the following statement best describes frequency?

A. the maximum disturbance caused by a wave

B. the number of complete vibrations per second

C. the distance between one crest of a wave and the next one

D. the distance travelled by a wave per second

Rift valley is formed because of faulting.