Draw a triangle A

On the basis of the question, the figure can be drawn as follows: 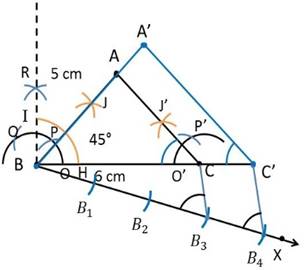 
∴ In triangle ABC, we have (iv) Now, join B3C and then draw a parallel line through B4 to B3C which intersect the extended BC at C’ 
From the figure, we have:

As line A’C’ is parallel to Ac, therefore, it will make the same angle with the line BC


Now, in triangle A’B’C’ and triangle ABC we have:

Hence, the construction is justified.

The weight of the

O is the centre o