Circumcenter of a triangle: The intersection of perpendicular bisectors of the triangles.

Incenter: The intersection of angle bisectors of the triangle.

Centroid: The intersection of the medians of the triangle.

Orthocentr: The intersection of the altitudes of the triangle

In order to prove that, In an equilateral triangle, circumcenter, incentre, centroid and orthocenter coincide, it is sufficient to prove that for any side median, altitude, perpendicular bisector and angle bisector of angle opposite to that side is common.

Let us consider an equilateral ΔABC, such that AD is a median to side BC. 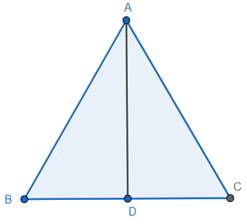 (i) AD ⊥ BC [AD is Altitude and perpendicular bisector of BC]

Now, As corresponding parts of congruent triangles are equal [CPCT], we have

∴ AD is perpendicular bisector of BC and as well as altitude from A to BC.

AD is angle bisector of ∠A.

We can prove this result for every median, and since lines are same, their intersection will also be same.

How useful is this solution?We strive to provide quality solutions. Please rate us to serve you better.
PREVIOUSIf the length of three medians of a triangle are equal. Let us prove that the triangle is an isosceles triangle.NEXTAD, BE and CF are three medians of a triangle ABC. Let us prove that the centriod of ABC and DEF are the same point.
Related Videos

Effect of Temperature on Matter39 mins

AD is the median and G is the centriod of an equilateral triangle. If the length of side 3√3 m, then let us write the length of AG.

Let us write what is the length of circum radius of a triangle lengths of sides of which are 6 cm, 8 cm and 10 cm.

If the length of circum radius of a right-angled triangle is 10 cm, then let us write how much length of hypotenuse of triangle is.

I draw an obtuse angled triangle and let us prove that the perpendicular bisectors of sides are concurrent. Let us write where the circumcentre lies (inside/outside/on the side) of the triangular region.

DEF is a pedal triangle of an equilateral triangle ABC. Let us write the measure of ∠FDA

AD, BE and CF are the medians of ΔABC. If

AD = BC, then let us prove that the angle between two medians is 90°.

AD, BE and CF are three medians of ΔABC. Let us prove that

Three medians AD, BE and CF of ΔABC intersect each other at the point G. If area of ΔABC is 36 sq. cm, let us calculate.