In problems of maxima and minima first we should recognize the terms to be maximized or minimized, and that term will be differentiated and equated to zero.

The double differentiation of that term should be negative for maxima and positive for minima.


But the term to be maximized or minimized should be in one variable and rest constants.


Let the sides of the rectangular part be x and 2y, so the radius of the semicircle will be y. Also, we are given that the total perimeter if the window is 10, which means 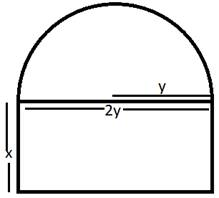 
Differentiating area with respect to y, we get,

Now, calculating the double differentiation we get,

If the sum of the

A metal box with

Prove that the se

Prove that the ra

Prove that the le