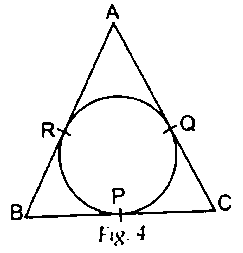 Given: AB = AC and ∆ABC circumscribe a circle with the circle touching the side AB at R, AC at Q and BC at P.


To Prove: P bisects the side of the triangle, BC.


QC and CP are tangents to the circle from the same point. ⇒ QC = CP …(ii)


Also, RA and AQ are tangents to the circle from the same point. ⇒ AQ = AR …(iii) 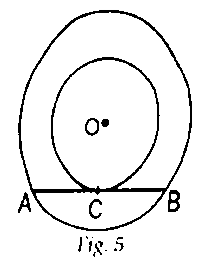 Given: A chord AB of the larger of the two concentric circles having mid-point O, touching the smaller circle at point C.


Proof: AB is tangent to the inner circle and OC is meeting AB at C.


AB is also the chord of the outer circle, on which OC is perpendicular to.


∵, According to the chord theorem, the perpendicular from the centre of a circle to a chord bisects the chord.


Thus, this only justifies that OC bisects AB at the point of its contact.