If a line is drawn parallel to one side of a triangle intersecting the other two sides, then it divides the two sides into same ratio. 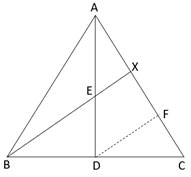 In ΔEAX and Δ ADF