Construct a triangle ABC whose perimeter is 12 cm and the angles are in the ratio 2:3:5.

Step1: construct a segment XY of length perimeter which is 12 cm 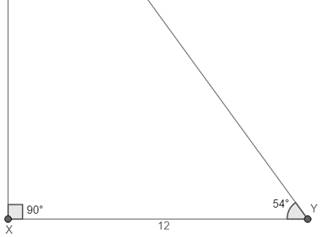 Step3: draw angle bisectors using protractor of ∠X and ∠Y and mark their intersection point as A

Step4: take any distance approximately by observation in compass greater than half of XA. Keep the needle of the compass on point A and mark arcs above and below XA and keeping the same distance in compass keep the needle on point X and cut the arcs as shown and join both the intersected arcs. Thus we have drawn the perpendicular bisector of AX. Mark the intersection point of the perpendicular bisector of AX and XY as point B

Step5: similarly draw perpendicular bisector of segment AY and mark the intersection point with XY as C join AB and AC and required ΔABC is ready 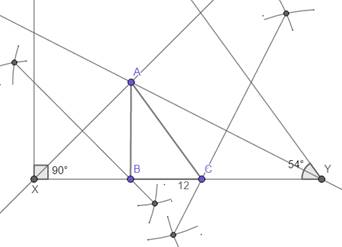 How useful is this solution?We strive to provide quality solutions. Please rate us to serve you better.
PREVIOUSConstruct a triangle ABC whose perimeter is 9 cm and the angles are in the ratio 3:4:5.NEXTConstruct a triangle ABC in which BC = 4.5 cm, ∠B = 35° and the difference between the other two sides is 2.8 cm.
Related Videos

Construct an isosceles triangle whose altitude is 5 cm and whose vertex angle is 70 °.

Construct an equilateral triangle of height 5.2 cm. Measure approximate length of the its side.

Construct an isosceles triangle whose altitude is 5 cm and whose vertex angle is 80°.

Construct a triangle XYZ whose perimeter 15 cm and whose base angles are 60° and 70°.