ABCD is a quadrilateral in which AD = BC. If P, Q, R, S be the mid-points of AB, AC, CD and BD respectively, show that PQRS is a rhombus.

To prove: PQRS is a rhombus

The Midpoint Theorem states that the segment joining two sides of a triangle at the midpoints of those sides is parallel to the third side and is half the length of the third side. 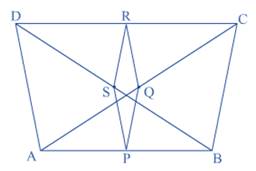 P and S are the mid points of sides AB and BD,

So, by midpoint theorem,

R and Q are the mid points of CD and AC,

So, by midpoint theorem

PQRS is a parallelogram … (iii)

Now, In ΔABC, by midpoint theorem

Since PQRS is a parallelogram with PS = PQ then PQRS is a rhombus.

How useful is this solution?We strive to provide quality solutions. Please rate us to serve you better.
PREVIOUSIn fig., we have AB∥CD∥EF. If AB = 6 cm, CD = x cm, EF = 10 cm, BD = 4 cm and DE = y cm, calculate the values of x and y.NEXTIn an isosceles triangle ABC, if AB = AC = 13 cm and the altitude from A on BC is 5 cm, find BC.
Related Videos

Tick the correct answer in the following and justify your choice: If the perimeter and the area of a circle are numerically equal, then the radius of the circle is

Saturated hydrocarbons are classified into three types. Write these names giving one example each.

Is the narrator as rich as Tricki's mistress?

What would have happened to Matilda if she had confessed to her friend that she had lost her necklace?

If you were caught in a situation like this, how would 'you have dealt with it?