BE and CF are the bisectors of ∠ABC and ∠ACB respectively

ASA congruency rule = If 2 angles and one side between them of both triangles are equal then both triangle are congruent.

If 2 triangles are on same base And having equal area then they lies between 2 parallel lines. 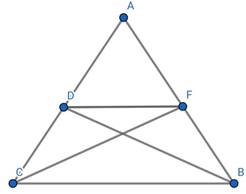 If BE and CF are the bisectors of ∠ABC and ∠ACB

Then opening the triangles we get,

On subtracting we get

And they are on same base FE

Hence; they are between parallel lines

AD and BE are the

AD is the median

O is any point ou

Write a letter to

Now use these adv