16. Verification of the Relation Between the Angles and Sides of a Triangle

In ΔABC, the exte

Class 8thWest Bengal - Mathematics16. Verification of the Relation Between the Angles and Sides of a Triangle

Given: ΔABC, external angle bisectors of ∠ACB, line parallel to BC passing through point A meets 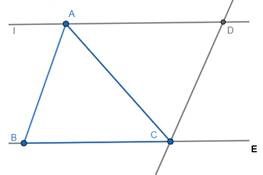 We know in a triangle the measure of any exterior angle of a triangle is equal to the sum of the measures of its two interior opposite angles.

So in this case,

But it is also given CD is angle bisector of ∠ACE, so

Substituting the above value in equation (i), we get

We know in a triangle the sum of all three interior angles is equal to 180°.

So in this case,

Substituting the value from equation (ii) in above equation, we get

How useful is this solution?We strive to provide quality solutions. Please rate us to serve you better.
PREVIOUSThe external biseNEXTLet’s prove that
Related Videos

Quiz | Sherlock Holmes and The Mystery Of The Aquilla Diamond61 mins

In ΔABC, the exte

If we produce the

Shoes of the foll

Do you think it i