Let ΔABC in which AB, BC and CA are its sides. 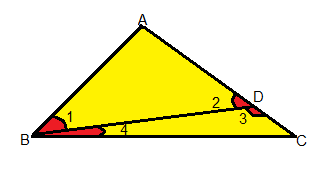 Construction: Take a point D on AC such that AD = AB and Join B to D

∠3 is an exterior angle.

[Angle opposite to equal sides are equal]

∠2 is an exterior angle.

[greater angle has a longer side opposite to it]

Hence, the difference of the lengths of any two sides of a triangle is less than the length of the third side.