As per the given condition the figure can be drawn as: 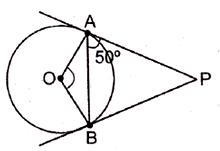 We know that, tangents drawn from external point to a circle are equal


Also, angles opposite to equal sides are equal to each other


Sum of all angles of triangle is 180o


Now, we know that in a cyclic quadrilateral sum of opposite angles is equal to 180o


∴In cyclic quadrilateral OAPB, we have: