Let us assume an object of mass m, is kept at rest initially at a height h above the ground, and object is suddenly released , so it will gain speed , and let the Velocity of object just before hitting the ground be v 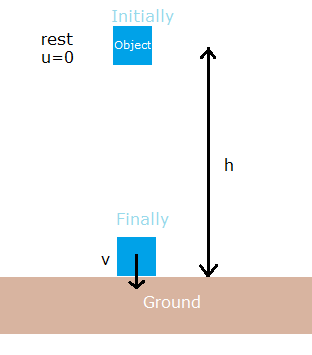 g is acceleration due to gravity

now when object approaches ground, just before hitting the ground let the velocity of object be v, so its kinetic energy will be

u is the initial velocity of the object,

S is the displacement covered by object and

a is its acceleration during motion

Now initially object was at rest, so its initial velocity

due to acceleration final velocity of object changed to v, in moving from height h to ground, so its displacement is

And putting the values in the equation we get

Or we get value of square of final velocity as

Now, putting the value of v2 in equation of final kinetic energy of the object we get

Solving we get final kinetic energy of the object as

Initial potential energy of the object is

And since initially object was at rest, so its initial kinetic energy was zero, and finally object was just near the ground i.e. its height from surface of earth is zero, so its final potential energy is also zero

Introduction to Lines and Angles60 mins

IMP Theorems And Their Application43 mins