Prepare an album of pictures and information on the monuments

of Delhi Sultans under the guidance of your teacher.

Delhi Sultans were great lovers of art and architecture. They built many tombs, forts, minarets and mosque in Indo-Islamic style of architecture. 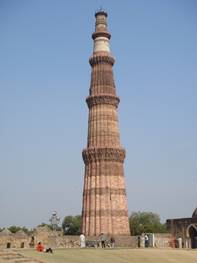 The Construction of Qutb Minar, the tallest minaret was started by Qutubuddin Aibak in 1193. It was finished by Iltamush. It is a 73 meter tall tower. It is located at Mehrauli in New Delhi.

This was the first mosque in Delhi after the entry of the muslims in India. 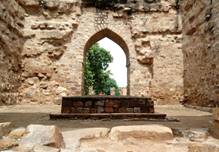 This is the finest example of amateur Indo-Islamic architecture.

Tughlaqabad was constructed by Tughlaq dynasty. The entire construction was made with stone ramparts. Tomb of Sultan Ghiyasuddin is noteworthy.

How useful is this solution?We strive to provide quality solutions. Please rate us to serve you better.
PREVIOUSActivitiesLocate the places won by Delhi Sultans in a map of India.
Related Videos

Prepare an album of pictures and information on the monuments

of Delhi Sultans under the guidance of your teacher.

The capital city was shifted from Delhi to __________ during the rule of Thuglaq.

Locate the places won by Delhi Sultans in a map of India.

Locate the Rajput Kingdoms in a map of India.

Prithivraj Chouhan defeated _______ in the first battle of Terrain.