(note: the question is based on the concept of reduced mass)

Now from the energy formula of nth electron, we have,

where n is nth orbit

m is reduced mass of electron and nucleus system

in permittivity in vacuum

is the energy of the electron in nth orbit

In the above Bohr’s formula

because the electron experiences an electric force due to nucleus and by newton’s second law there is a reaction force on the nucleus due to electron , ∴ actually both nucleus and electron tend to revolve around their center of mass and thus we use concept of reduced mass given by, 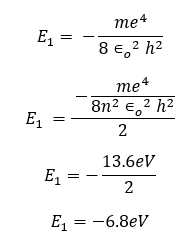 Suppose in an ima

In the Auger proc

A particle is mov

(a) Name the meth