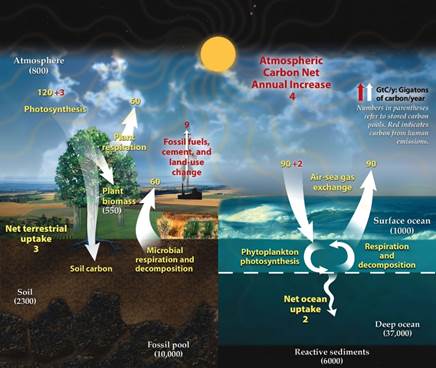 Carbon is the most important element in the biological system and constitutes about 50% of all living organisms. It occurs through atmosphere, oceans and through living and dead organisms.

2. From plants to animals: Consumption of plants by animals directly or indirectly transfers the carbon molecules as glucose through the food chains.

3. From plants to animals: From living things to the environment: When plants and animals die, they decompose into the soil. During this decomposition, the carbon compounds in their bodies re-join the soil.

6. Carbon moves from the atmosphere to the oceans: The oceans soak up carbon through the surface and deposits from rivers and estuaries.

Show that the poi