Equilibrium angle of thread with vertical=60°

Let the surface charge density on the plate be σ 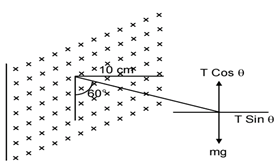 The forces acting on the ball are

• Weight of the ball downwards (W=mg)

Where q=charge of the ball

Since the ball is in equilibrium, the net horizontal and vertical force on the ball is zero

Applying equilibrium along horizontal direction, we get

Similarly, applying equilibrium along vertical direction, we get

Putting the value of E from eqn.(i), we get,

Putting the values of ϵ0,m,g and q in the above equation

Therefore the surface charge density on the plate is given by 7.5× 10-7C/m2

A charge Q is pla