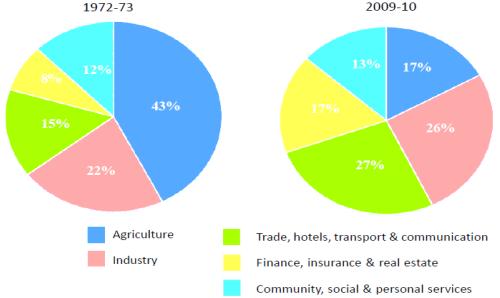 ii) The agricultural sector has decreased from 43% to 17%. The reason for this is the industrial revolution. Due to new methods of manufacturing, more factories were set up and people started to prefer to work in factories rather than on the farm. The goods were produced in mass and at cheaper rates. Gradually the industrial sector started to dominate the economy surpassing the agricultural sector.

How useful is this solution?We strive to provide quality solutions. Please rate us to serve you better.
PREVIOUSRead the 4th paraNEXTWhat <span lang="
Related Videos

The workers in th

Do you think the

How is the servic

For each of the s