Name the three major functional regions of cells. Briefly mention the components of each and explain the function of each.

(a) Cell Membrane – The outermost layer which regulates the inflow and outflow of various substances of a cell is the cell membrane. It is also known as the plasma membrane. Its main function is to surround and protect the cytoplasm of the cell. The membrane is made of phospholipids bilayer having protein and carbohydrate molecules infused within the lipid bilayer. This fluid-structure provides enough mechanical support and flexibility to allow cells to grow and move. The cell membrane acts as a gate which allows only certain molecules into or out of the cell.
(b) Cytoplasm – It is the jelly-like component within the cell and is mostly composed of water along with various nutrients required by the cell. It provided the enriching environment within the cell for several metabolic reactions to occur systematically.
It serves various functions within the cell: 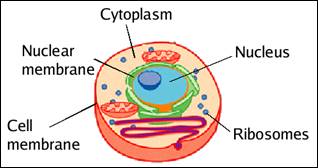 (c) Nucleus – The nucleus is also known as the master of the cell. It contains the code of life within itself, i.e. DNA (Deoxy-ribonucleic acid) which codes the genetic information of the cell. It is present in the eukaryotic cell but is absent in prokaryotic cell. Instead, prokaryotic DNA is freely lying in the cytoplasm in a region called nucleoid. It is separated from its surrounding cytoplasm by the nuclear membrane. Also, this membrane has certain small pores which regulate the exchange of materials like protein, RNA, etc between the cytoplasm and nucleus. It has chromatin material within the cell consisting of thin long threads of DNA encircled around protein. 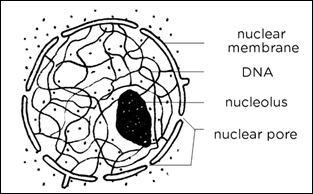 How useful is this solution?We strive to provide quality solutions. Please rate us to serve you better.
PREVIOUSDraw and label a plant cell. Write the main function of:NEXTMedical science took a giant step forward when it declared its capability to store stem cells. Stem cells can be used later on to treat certain diseases if need arises. Along with many Western countries. India also has the facility for storage of stem cell and for use of the same for therapy. Scientists’ are trying their best to maximize the benefit from storage of stem cells.(i) What is the main source of stem cells?(ii) What are the diseases that can be treated by storing stem cells?(iii) What value is shown by the scientists?
Related Videos