Name the part of the alimentary canal where major absorption of digested food takes place. What are the absorbed forms of different kinds of food materials?

The part of the alimentary canal where major absorption of the digested food takes place is small intestine.

The biomacromolecules of food are converted into simple substances in duodenum region of the small intestine.

The simple substances thus formed are absorbed in the jejunum and ileum regions of the small intestine.

Villi are supplied with a network of capillaries and a large lymph vessel called the lacteal.

So the absorbed forms of different kinds of food materials are amino acids, monosaccharide, fatty acids and glycerol.

How useful is this solution?We strive to provide quality solutions. Please rate us to serve you better.
PREVIOUSWhat is pancreas? Mention the major secretions of pancreas that are helpful in digestion.NEXTList the organs of human alimentary canal and name the major digestive glands with their location.
Related Videos

Clear your concepts of Anatomical structure of Intestine53 mins

How is the intestinal mucosa protected from the acidic food entering from stomach?

Discuss the role of hepato – pancreatic complex in digestion of carbohydrate, protein and fat components of food.

How are the activities of gastro-intestinal tract regulated?

What are three major types of cells found in the gastric glands? Name their secretions.

a. Absorption of amino acids and glycerol takes place in the. (small intestine/ large intestine)

b. The faeces in the rectum initiate a reflex causing an urge for its removal. (neural /hormonal)

d. Rennin is a proteolytic enzyme found in gastric juice in (infants / adults).

f. Dipeptides, disaccharides and glycerides are broken down into simple substances in region of small intestine. (jejunum/ duodenum)

Describe the enzymatic action on fats in the duodenum.

What is pancreas? Mention the major secretions of pancreas that are helpful in digestion.

Name the part of the alimentary canal where major absorption of digested food takes place. What are the absorbed forms of different kinds of food materials? 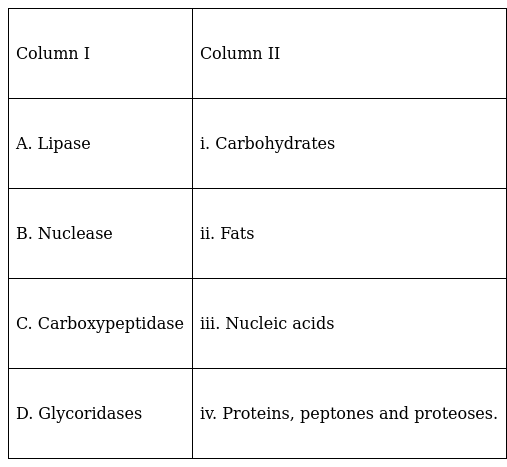 Identify a list of various services you use on a regular basis and identify their distinct characteristics.

A line perpendicular to the line segment joining the points (1, 0) and (2, 3) divides it in the ratio 1: n. Find the equation of the line.

Which term of the following sequences:

Find the equation of a line that cuts off equal intercepts on the coordinate axes and passes through the point (2, 3).

The perpendicular from the origin to a line meets it at the point (–2, 9), find the equation of the line.