Name the group of

Sexual reproduction is characterized by the fusion of male and female gametes.

Plants have to complete the vegetative phase to reach a certain stage of growth and maturity. It is only after this period that they can reproduce sexually. The higher order plants, the reproductive phase of the plant are characterized by the flowering. This flowering phase in plants can vary from plant to plant. Angiosperms are a plant of a large group that comprises those that have flowers and produce seeds.

Pollination, which is the process of transferring the pollen to the stigma, can occur in two ways. It can be either through self-pollination or cross-pollination.

Pollen can’t get from the anthers to the ovules on its own, so pollination relies on other things to move the pollen.

• The wind or animals, especially insects and birds, pick up pollen from the male anthers and carry it to the female stigma.

• Flowers have different shapes, colors and smells, and often sugary nectar and nutritious pollen, to encourage animals to visit and pollinate them.

• Wind-pollinated flowers are shaped to make it easy for the wind to pick up or deposit pollen.

In this way, the male gametes are transferred to the stigma of the flower, from where they reach the ovary. 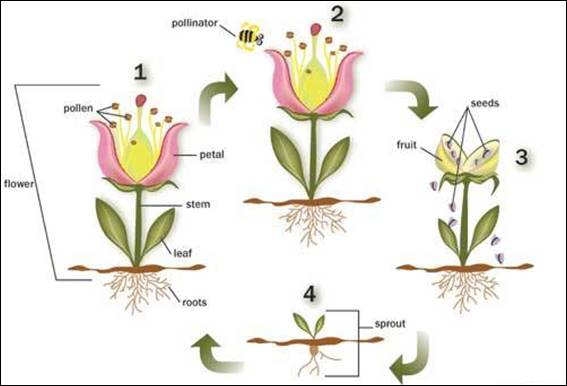 Fertilization occurs in the ovary, when the male gametes fuse with the female gametes, resulting in the formation of the zygote. This zygote divides further and develops into an embryo. The ovary gets transformed into the fruit. This is how Sexual reproduction occurs in flowering plants.