(i) Since there are 2 chlorine atoms, the name would start as ‘dichlorido’ and there are 2 –en groups attached, so it would be bis (ethan-1,2-diamine). Also the entity as a whole is an ion and the central atom is cobalt. The charge on cobalt is +3 (Cl atoms contribute -1 charge each and the entity itself is charged +1).

So, the name stands as:

(ii) There are 3 oxalte ions so the name would start as trioxalato and the central atom chromium has charge of +3 (as the oxalate ions do not carry any charge as a whole). So the name stands as: 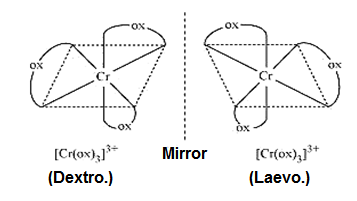 (iii) There are 3 –NH3 (ammine) atoms and 3 –Cl (chlorido) atoms but alphabetically, ammine comes before chlorido, so the name starts as ‘triamminetrichlorido’. The central atom cobalt has +3 charge (as Cl atoms carry -1 charge each and NH3 atoms carry no charge). So the name stands as: