We know that if a point moves in plane in such a way that the sum of its distance from two fixed point is constant, then the path is an ellipse and this constant value is equal to the length of the major axis of the ellipse.

Therefore, the path described b the man is an ellipse where the length of the major axis is 10m, while points A and B are the foci.

Taking the origin of the coordinate plane as the centre of the ellipse, while taking the major axis along the x- axis, the ellipse can be diagrammatically represented as 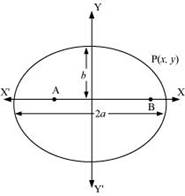 The equation of the ellipse will be of the form

, where a is the semi-major axis.

On using the relation, c =

Hence, equation of the path traced by the man is

A beam is support

The towers of bri