The vertex is at the lowest point of the cable. The origin of the coordinate plane is taken as the vertex of the parabola, while its vertical axis is taken along the positive y –axis. This can be diagrammatically represented as 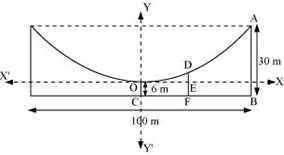 Here, AB and OC are the longest and the shortest wires, respectively, attached to the cable.

DF is the supporting wire attached to the roadways, 18m from the middle.

The equation of the parabola is of the from x2 = 4ay (as it is opening upwards).

Thus, Equation of the parabola,

Thus, the length of the supporting wire attached to the roadway 18m from the middle is approximately 9.11m.

A beam is support

The towers of bri