A number of chromosome of a particular organism is always constant because of mitosis/equational division and meiosis/reductional division.

This is done as follows gametes are formed by the meiosis during the process of gametogenesis. As a result chromosome gets reduced into half. When these gametes fuse, that is, at the time of fertilization, the number of chromosomes becomes equal to that in a somatic cell. After this, when cells multiply due to mitosis, the number of cells become consistent. 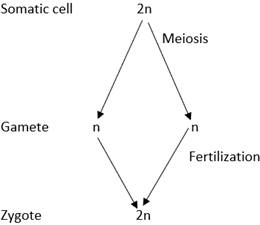 How useful is this solution?We strive to provide quality solutions. Please rate us to serve you better.
PREVIOUSExplain howNEXTFor which positio
Related Videos