Mention the three major layers of the interior of the Earth.

The three major layers of the interior of the earth are:

Is the uppermost layer of the Earth, rich in Silica, Aluminum and Magnesium. This layer is about 60 kms from the surface. Is further divided into upper continental crust (SIAL) and lower oceanic crust (SIMA).

Is the middle layer of the Earth. Is composed of dense and rigid rocks which have a predominance of minerals like magnesium and iron. This layer is 2900 kms deep. The materials are in semi-liquid or molten state called the magma. The layer is further divided into two: (a) Upper mantle or Asthenosphere in a partially molten condition and (b) Lower mantle or Mesosphere in solid condition.

Is the innermost layer of the Earth. The important minerals are Nickel and Ferrous (iron). This layer has a maximum depth of 6371 kms from the surface. The core is divided into two sub layers: (a) the outer core is known as molten core, where the materials are in liquid and in molten form, and (b) the inner core known as solid core.

The core is the innermost layer, mantle is the middle layer and the crust is the outermost layer.

How useful is this solution?We strive to provide quality solutions. Please rate us to serve you better.
PREVIOUSFill in the blanks with suitable words:The Beaches are formed by __________ work.NEXTAnswer the following questions:Name the types of volcanoes on the basis of frequency of eruption.
RELATED QUESTIONS :

Mention the three major layers of the interior of the Earth.

Name the landforms associated with the work of river.

What is weathering? Name the three main types of weathering.

Name the types of volcanoes on the basis of frequency of eruption. 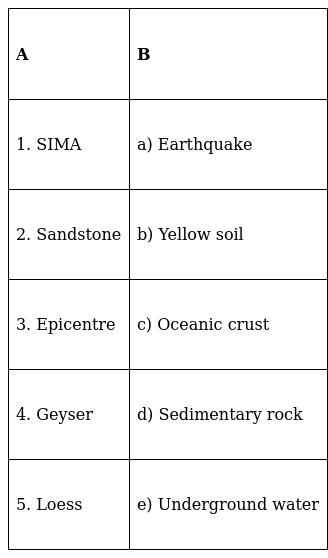 Stalactites and Stalagmites are most common in ________ .

The continental crust is also called _____.

(Audio Visual Recordings are considered the most trustworthy source for the study of Modern Indian History.

Half of a herd of deer are grazing in the field and three fourths of the remaining are playing nearby. The rest 9 are drinking water from the pond. Find the number of deer in the herd.

A grandfather is ten times older than his granddaughter. He is also 54 years older than her. Find their present ages.