In humans, the pancreas (β cells of Islets of Langerhans) produces insulin, a relatively smaller protein in an inactive form like a pro-hormone. This pro-hormone is known as pro-insulin. Mature insulin consists of two polypeptide chains, namely the A chain (having 21 amino acids) and the B chain (having 30 amino acids) which are joined together by disulphide bonds. However, proinsulin contains an extra polypeptide chain, the C peptide that is removed during maturation of proinsulin into insulin. The removal of this extra stretch of the polypeptide is important for proinsulin to be able to function as mature insulin.

Through recombinant DNA technology, it is possible to artificially synthesize mature insulin. 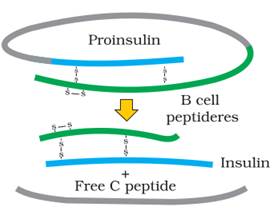 MATURATION OF PROINSULIN INTO INSULIN