When tall plants were crossed with the dwarf pea plants in the Mendel’s experiment, then in the first generation i.e. F1 progeny, only tall plants were obtained and no dwarf plant was obtained.

In F2 progeny, there were both tall and dwarf pea plants. The ratio of dwarf and pea plants was found to be 3:2 which confirmed that in F2 progeny, both the characteristics were inherited and the tall character of pea plant was found to be dominative and dwarf to be recessive. This was the law of segregation which says that when plants of different traits were crossed, then in the first progeny only the dominant character was observed whereas in F2 progeny both dominant and recessive traits were obtained. 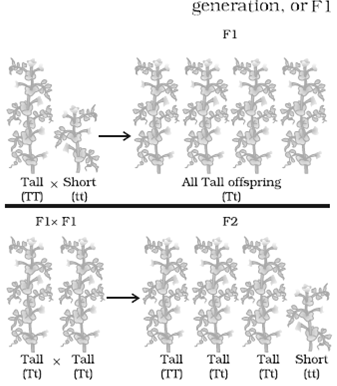 ‘There is no real