Methanol (CH3OH) is toxic in nature. It is called wood alcohol or wood spirit because earlier it was produced chiefly by the destructive distillation of wood. But today, it is produced industrially by the hydrogenation of carbon monoxide gas.

First phenol reacts with sodium hydroxide (NaOH). Like a normal acid-base reaction, salt and water are produced where salt is sodium phenoxide. Sodium phenoxide on heating with CO2 at 400K and at a pressure of 4-7atm, sodium salicylate is formed. 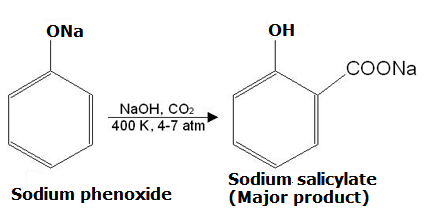 This is because CO2 attacks the ortho position of sodium phenoxide initially and then rearrangement occurs. As CO2 attacks, the ortho-Hydrogen atom is substituted by the COO-group(from CO2) and the H+ and Na+(from sodium phenoxide) interchange their position to form sodium salicylate.

The acidification occurs (attack of H+) and salicylic acid is formed.

Williamson’s synthesis is based on the nucleophilic substitution of alkyl halides(R-X) in which halogen(X) are replaced with alkoxy group (-OR’) where R and R’ are alkyl groups. Thus we get R-OR’ which is an ether. So this method is used in the preparation of ethers.

This method involves the treatment of an alkyl halide with sodium or potassium salt of an alcohol or phenol.

The halide used in this reaction should be primary otherwise secondary or tertiary halides readily undergo elimination reaction in the presence of a strong base to form alkenes instead of ethers which is not desired.

When 2° alcohols are subjected to heated Cu turnings at 573K through a tube then dehydrogenation occurs (oxidation reaction).

2° alcohols are oxidized to form ketones having the same number of Carbon atom as the initial alcohol.

• When primary alcohol is dehydrogenated with Cu at 573K under same conditions then an aldehyde is produced having same number of Carbon atoms as the initial alcohol.

• Tertiary alcohol however does not get hydrogenated due to the absence of α-hydrogen (Hydrogen atom present at the carbon atom adjacent to the carbon atom having the functional group – OH). Instead due to dehydration , an alkene is produced having same number of Carbon atoms as the initial alcohol.

Treatment of phenol with chloroform(CHCl3) in the presence of an aqueous alkali at 340K results in the formation of salicylaldehyde as major product and the para isomer 4-hydroxybenzaldehyde as minor product. This is the step by step reaction mechanism for the reaction.

First an electrophile dichlorocarbene (:CCl2) is formed from CHCl3.

After the generation of electrophile, the electrophile attacks the ortho position of the phenoxide ion(which is resonance stabilized). Now

is formed and NaOH is made to react with it. Due to which, dehydration takes place and ultimately by acidification, salicylaldehyde is produced.

Whenever, 2 –OH groups are attached to same Carbon atom, the molecule itself is unstable. To regain its stability, the molecule loses 1 water molecule.

Fermentation of carbohydrates (like sugar) yields ethanol containing water. This solution on fractional distillation forms an azeotropic mixture (mixture of liquids that have a constant boiling point) containing 95% ethanol and 5% water. This 95% ethanol is called rectified spirit.

Sucrose is first converted to glucose and fructose with enzyme invertase.

Enzyme zymase(present in yeast)then converts glucose and fructose to ethanol.

Fermentation is carried out in anaerobic conditions (in absence of air).