4. Absorption by Roots - The Processes Involved

(a) Xylem – upward flow of water

It is the part of the vascular bundles which conducts water and minerals from the soil to the leaves. This can be observed if one removes a cylindrical part xylem from the twig the leaves of the twig wilts due to loss of water. Thus one can say xylem is concerned with the upward flow of water.

(b) Phloem – downward flow of sap

It is the part of the vascular bundles which conducts glucose from the leaves to the other parts of the plant. This can be observed if one removes a ring of phloem from the twig the upper edge swells up after some time. Thus one can say phloem is concerned with the downward flow of sap. 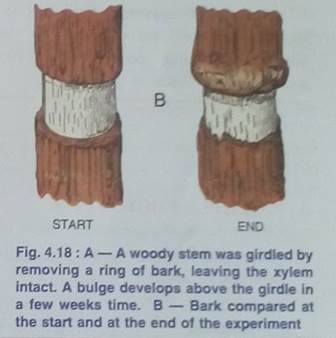 Root pressure is the pressure developed by the inflow of water during transpiration due to suction pull in the roots. This intake of excess water accumulates in the cells and oozes out early in the morning through special structures known as hydathodes, in form of water droplets.

Cell wall is a highly porous structure that gives passage to large solute molecules and other elements. Also, the pours are larger in size than the pours found in a semi-permeable membrane.

How useful is this solution?We strive to provide quality solutions. Please rate us to serve you better.
PREVIOUSFill in the blanks by choosing the correct alternative from those given in brackets.Active transport is in a direction ......... to that of diffusion. (Opposite / same)NEXTDifferentiate between the following:Plasmolysis and deplasmolysis
Related Videos

Know About Your Food Digestion !62 mins