18. Pollution of Air and Water 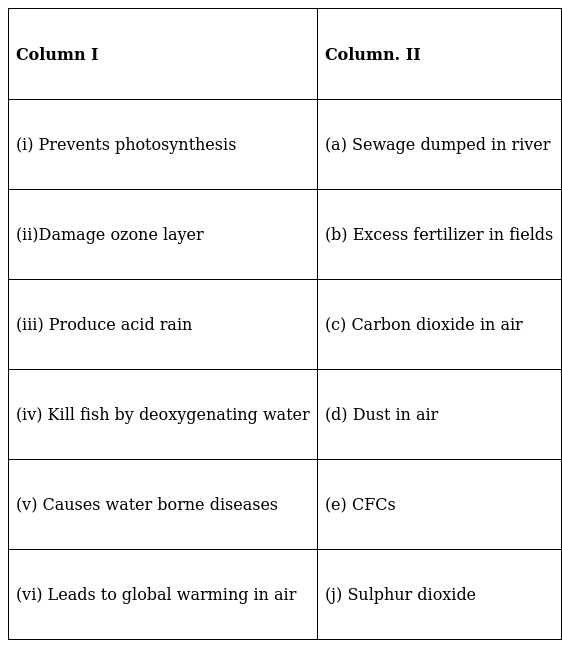 Dust reduces the photosynthesis in plants due which causes a decrease in energy production in plants causing the plants to suffer.

Chlorofluorocarbons used in refrigerators, air conditioners and aerosol sprays are responsible to deplete the ozone layer in the atmosphere. Ozone layer protects us from harmful ultraviolet rays of the sun.

Sulphur dioxide and nitrogen dioxide which reacts with water vapors in the atmosphere to form sulphuric acid and nitric acid. These acids combine with rain and makes the rain water acidic. This is called Acid rain.

The fertilizers act as nutrients for the algae to grow. When these algae die, they act as a nutrient for decomposers like bacteria. As a result of this process, a lot of oxygen in the water gets used up and leads to the deficiency of Oxygen in the water. This may kill the aquatic organisms including fish.

Sewage water contains bacteria, viruses, protozoa, fungi and parasites(worms) which may cause diseases like cholera, typhoid and jaundice.

Carbon dioxide is the gas which is mainly responsible for causing global warming. Carbon dioxide traps heat and does not allow it to escape into space causing an increase in the average temperature of the earth’s atmosphere.

How useful is this solution?We strive to provide quality solutions. Please rate us to serve you better.
PREVIOUSAt many places the wastewater containing human excreta from homes and carried in big underground pipes is dumped into a river as such which pollutes the river water.(a) What is the common name of such wastewater?(b) Name five types of harmful organisms contained in it.(c) Name any five human diseases caused by drinking river water contaminated with such wastewater.NEXTState one way in which the air pollution caused by the burning of fossil fuels in transport and industry can kill the fish living in a lake and one way in which the water pollution caused by an agricultural activity can kill fish living in the same lake.
Related Videos

Be Nice To Water and Air That We Have To Share!31 mins

Some Experiments with Water30 mins

Discovery and Types of Microorganisms42 mins

Units and Systems of Measurement49 mins

Which gas in the upper atmosphere prevents ultraviolet radiations of the sun from reaching the earth?

Name two gases present in polluted air which can cause acid rain.

Which air pollutant combines with the haemoglobin of our blood?

What depletes the ozone layer in the atmosphere? What are the harmful effects of the depletion of ozone layer on us?

One of the following does not contribute in producing acid rain. This one is:

The constituent of polluted air which contributes in producing acid rain is:

Which of the following air pollutant is capable of preventing photosynthesis in plants?

Which of the following is not an air pollutant?

Listed below are the temperature in °C for 10 days.

What is the range of the data?

Students of a class voted for their favorite colour and a pie chart was prepared based on the data collected.

Observe the pie chart given below and answer question based on it.

Which of the following is a reasonable conclusion for the given data?