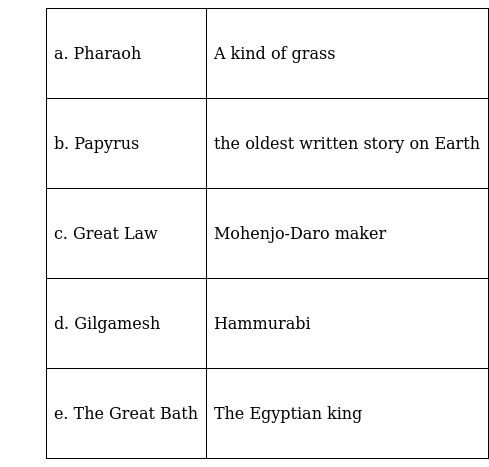 a. Pharaoh - The Egyptian king

Pharaoh is the common title of the Kings of ancient Egypt

b. Papyrus - A kind of grass

Papyrus is also the name given to the paper produced out of it.

Hammurabi, the sixth king of Babylon, belonging to the first Amorite dynasty (1792–1750 BCE), achieved distinction as a great lawmaker.

the hero Gilgamesh is referred to in the initial ever epic on the earth. He may have been a king of Sumeria.

The tank called the Great Bath at Mohenjo-Daro is a significant structure, well cemented with several adjacent rooms.

How useful is this solution?We strive to provide quality solutions. Please rate us to serve you better.
PREVIOUSFind out the correct statement:a. Amon was considered the king of god in ancient Egypt.b. The fortified Harappan city had the temples.c. The great sphinx is a pyramid-shaped monument found in ancient Mesopotamia.d. The invention of the potter’s wheel is credited to the Egyptians.NEXTAnswer the following briefly:The Egyptians excelled in art and architecture. Illustrate.
Try our Mini CourseMaster Important Topics in 7 DaysLearn from IITians, NITians, Doctors & Academic Experts
Dedicated counsellor for each student
24X7 Doubt Resolution
Daily Report Card
Detailed Performance Evaluation
view all courses

Prepare a hand out comparing the ancient world civilizations.

Prepare a chart on the pyramids and the mummies.

a. Amon was considered the king of god in ancient Egypt.

b. The fortified Harappan city had the temples.

c. The great sphinx is a pyramid-shaped monument found in ancient Mesopotamia.

d. The invention of the potter’s wheel is credited to the Egyptians.

The _______________ figurines and paintings on the pottery from the sites suggest the artistic skills of the Harappans.

a. The Great Bath at Harappa is well-built with several adjacent rooms.

b. The cuneiform inscriptions relate to the epic of Gilgamesh.

c. The terracotta figurines and the dancing girl made of copper suggest the artistic skills of Egyptians.

Assertion (A): Assyrians of Mesopotamian civilisation were contemporaries of Indus civilisation.

Reason(R): The Documents of an Assyrian ruler refer to the ships from Meluha

The Bronze image suggestive of the use of a lost-wax process known to the Indus people.