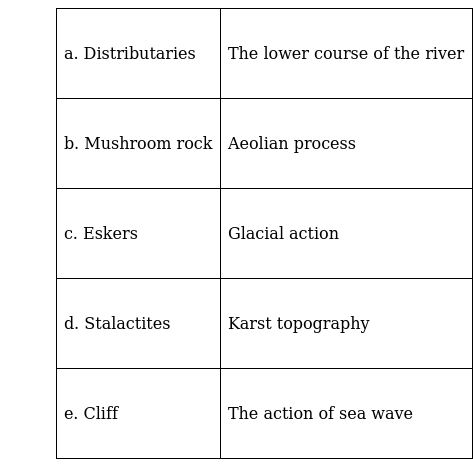 a. The lower course marks the journey of river mainly in the plains loaded with sediments, minerals and huge amounts of debris. This debris is deposited and accumulated in the low-lying river beds resulting in the formation of very fertile soil. This deposition and accumulation of components result in the formation of deltas. Typically, deltas will be triangular shaped that is formed at the low-lying mouth of rivers. It will contain huge volumes of mineral and sediment deposits. Here the main river will get split into a number of different river channels known as distributaries.

b. Erosion and deposition are also caused by the actions of wind. Many geographical features are created by the actions of wind. Mushroom rocks or pedestal rocks are an important feature caused by the erosive action of the winds. It is basically formed in rocks having a very soft base. In such situations, the wind erodes the soft layers of the base resulting in its erosion. The bottom layers are eroded resulting in the formation of a structure having a mushroom or pedestal-like structure in the top leaving its base like a stand to support the top.

c. Erosion and deposition are also caused by the actions of glaciers. Glaciers are huge masses of snow that is transported, accumulated and deposited in other regions due to the action of natural agents. Eskers are the depositional feature of glaciers consisting of boulders, gravel and sand that is deposited by the melting water in the glaciers. The melting glacier deposits the components that it carries leading to the formation of eskers.

d. The underground water is the major reason for the formation of the karst topography. Karst is formed due to the dissolution of limestone, dolomite and gypsum with the groundwater. It is created because of the gradation, erosion and deposition of these soluble rocks with the groundwater. Stalactites are an important form of karst feature. It is formed by the gradual dripping and evaporation of water having calcite components in the caves. The calcite components after evaporation of water hang down from the ceiling forming stalactites.

e. Erosion and deposition are also caused by the actions of ocean waves. It is an important agent for the creation of many geographical features. Cliffs are an important feature as a result of the erosion by sea waves. They are formed by the forceful dashing and blowing off the sea waves against the adjacent rocks. This results in the formation of steep vertical walls called cliffs.

Answer in a parag

Draw the map of w

How are Beaches f