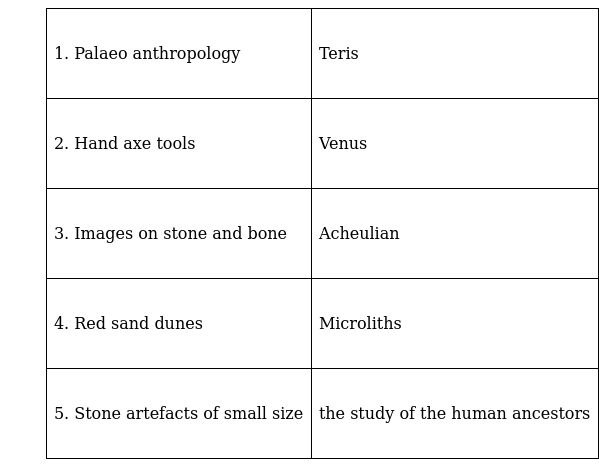 It is a branch of archaeology that deals with the origin and development of early humans.

Acheulian were the first-hand axes. They were founded at a place called St. Acheul in France.

3. Images on stone and Bone- Venus

They are found in Upper Palaeolithic culture. They were produced in Europe and part of Asia.

Teri dune is a coastal landscape. They are typically found in parts of Tamil Nadu.

The people of Mesolithic culture made use of Microlithic technology. Microliths were small stone used as tools during this period.

How useful is this solution?We strive to provide quality solutions. Please rate us to serve you better.
PREVIOUSFind out the correct statement:a) Among the great Apes, Orang-utan is genetically the closest to humans.b) The ancestors to humans were called Hominins and their origins have been traced to Africa.c) Flake is a small chip that has flaking on both sides.d) Acheulian is the main block of stone from which small chips are flaked by using a hammer stone.NEXTAnswer the following briefly:Discuss how the age of speculation made humans become conscious and knowledgeable.
Related Videos

History of Pythagoras and his therorem37 mins

Answer the following in detail:

The developments in the fields of agriculture, pottery and metal tools are considered a landmark in the life of Megalithic period-Substantiate.

Answer all the questions given under each caption:

a) Who are Hominids?

b) Who was the earliest human ancestor to make tools in Africa?

c) How are the modern humans known?

d) Name any one species of this tribe

a) The concept ‘survival of the fittest’ contributed to the scientific understanding of human origins.

b) The book on the Origin of Species was published by Herbert Spencer.

c) Darwin’s theory of biological evolution connects with the process of natural selection.

d) Geology is the study of lithic technology.

The methods and techniques involved in the production of stone tools are called __________ technology.

Assertion (A): The Ashokan inscriptions datable to third century BCE refer to the Cheras, Cholas, Pandyas and Satyaputras outside his empire in Tamilagam.

Hand axes and cleavers are the important tool types of the __________ culture.

Write the steps in deducing the chemical formulae of the following compounds.

If the vertical angle of a triangle is 130°, then the angle between the bisectors of the base angles of the triangle is

Write the molecular formulae for the following compounds