3. Classification of Elements and Periodicity in Properties

Match the correct ionisation enthalpies and electron gain enthalpies of the following elements. 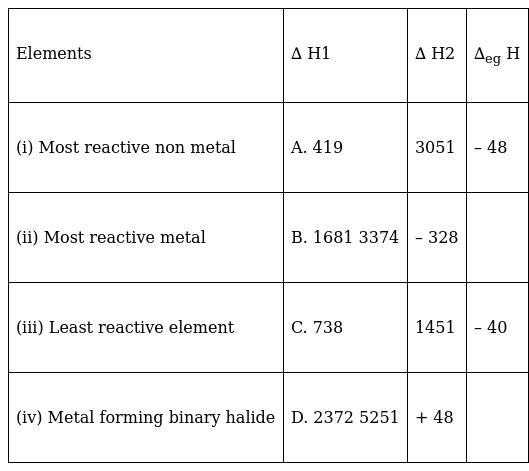 (i) Most reactive non metal is B

REASON: It has the highest negative electron gain enthalpy.

(ii) Most reactive metal =A

REASON: It has the lowest negative electron gain enthalpy as well as lowest first ionisation energy.

REASON:D is the least reactive element as it has an extremely high first and second ionisation enthalpy.

REASON: it has low first ionisation enthalpy than second but the different is not much.

How useful is this solution?We strive to provide quality solutions. Please rate us to serve you better.
PREVIOUSMatch the correct atomic radius with the element.NEXTMatch the electronic configuration with electron gain enthalpy.
Related Videos

NEET Questions of Nomenclature and classification of organisms48 mins